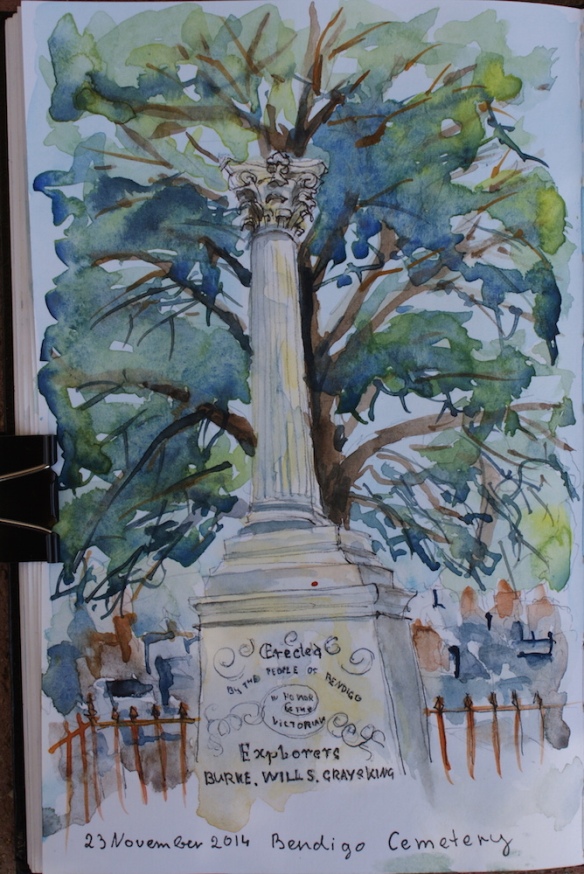 On Sunday I went to the Bendigo Cemetery to search for the second time for the memorial to Burke and Wills expedition. The first time I had no idea where it was located or how it looked, so after walking around the biggest landmarks and few gravestones I had to give up. I expected something grand and impressive looking, but upon checking found out that the monument consisted of “a Corinthian column mounted on a foundation stone and topped with a Grecian urn draped with the Union Jack”. You’ll notice that my sketch doesn’t have the urn, which you can see in the photo at the Burke & Wills website. I wondered if I managed somehow to miss a whole part of the monument while sketching, but the check of the photos that my husband took proved that it is gone (I wonder what happened to it).
The story of Burke & Wills expedition is tragic and full of the mischances. I still remember reading about it as a teenager back in Russia and being captivated by the story – at the time I had no idea that I’ll end up living in Australia only 30 minutes away from Castlemaine, where Burke worked as a Police Superintendent.